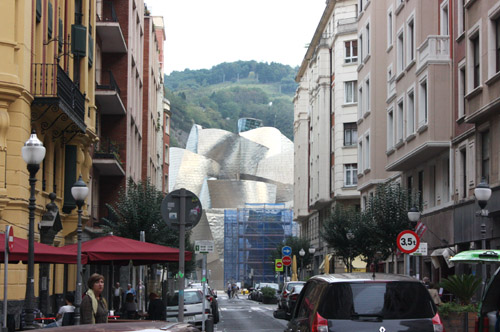 I remember being a graduate student in the Architecture program at the University of Texas at Austin when I first saw sketches of the proposed Guggenheim Bilbao Museum by Frank Gehry. I remember learning that Gehry was using software called CATIA (Computer Aided Three-dimensional Interactive Application) which was more commonly used in the aviation industry. I remember being impressed both by the visual impact of the design of the museum and the process by which it was being designed. Construction of the building was completed and the museum opened in October of 1997. Fifteen years later, I visited the museum.

In the photo above, the floral puppy sculpture by Jeff Koons was surrounded by scaffolding as it was receiving a new set of flowers. 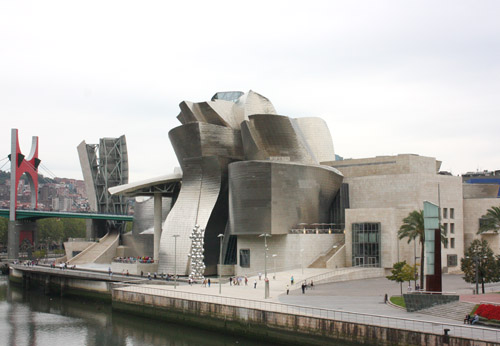 A view of the museum from across the river. The red, vertical structure of the Puente de los Príncipes de España, or La Salve Bridge over the Nervion River, was designed by Daniel Buren in celebration of the tenth anniversary of the museum.

It was a thrill to walk all the way around the building and see the changing light and shadows across the fluid, titanium surfaces. 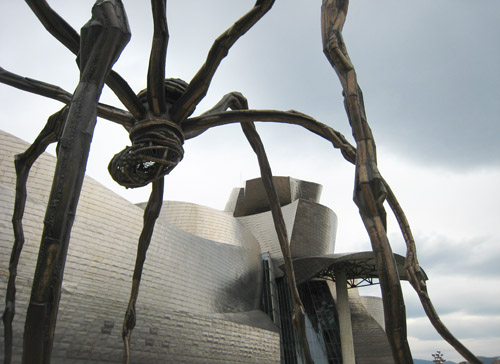 The the thirty feet tall spider sculpture, Maman, by Louise Bourgeois is an impressive sight on the plaza next to the river. I was fortunate to see another arachnid piece by Bourgeois earlier this year at the Palm Springs Art Museum.

A sculpture of silver balls by Anish Kapoor sits near the spider, and on the opposite side of the museum is the bright blue building that houses the museum offices with the Iberdrola Tower by Cesar Pelli in the distance. 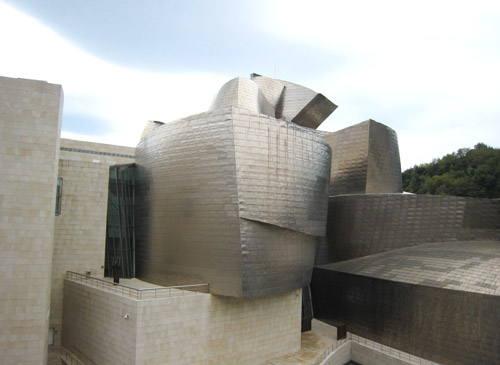 The building is said to loosely symbolize a ship as it occupies the former port on the river. Gehry also fondly references fish and their perfectly curving shapes, and the shining titanium sheets are reminiscent of scales.

Inside, glass and limestone define the spaces, and the curving shapes continue. On the right above, a detail view of the metal clip connection for one piece of glass.

The building is as delightful in real life as I thought it was for all those years of seeing it only in photos and sketches.